A press-fit terminal is a terminal pin that has a structure in which a terminal is press-fitted into a through hole on a board and has a holding force due to the springiness of the terminal shape. Originally, electrical connection is maintained by solder bonding and SMT mounting that also use reflow processing, but since the press-fit terminal is held only by its restoring force, it is possible to significantly reduce manufacturing costs such as reflow equipment costs and electricity costs. It is also a component that reduces the environmental load.

It has been used for consumer electronics such as personal computers for a long time, and recently it has been actively used for in-vehicle electronics parts mainly in Europe and the United States, and it is expected to be used more and more in the world in the future.

Please feel free to contact FINECS Vietnam if you require any further information. 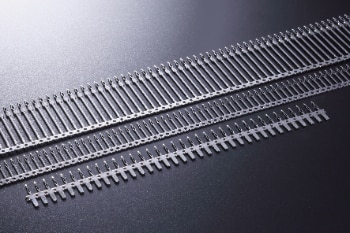 Micron precision mechanical parts in Vietnam
We process, manufacture and sell molds and jigs. Please feel free to contact us.